I went to the poll yesterday to cast my vote in the Virginia primary. It isn’t important who I voted for, and I’m not telling anyway. I arrived at 9:11 AM at the school, and the parking lot was virtually vacant. There were few to no signs advocating for particular candidates, and only one elderly man sitting at a makeshift table setup outside the entryway. He was talking to another couple and noticed me and smiled, but couldn’t hook my attention enough to beckon me over to his table. I don’t like to be lobbied for any reason, least of all for who I might want to run for President.

When I entered the school, and by extension the room where voting was taking place, I was instantly struck by two thoughts: there was hardly anyone else in the room voting, and everyone manning the polls was wearing either red or blue, but not both combined. For a workday just after 9 AM I understood that there might be some slowing at the polls. But where were the elderly, the retired, the people who work later hours like myself, the stay-at-home moms and dads, the diehard patriots, the people who have charge of their schedule, the college graduates living at home and off mom and dad, the unemployed, the sick but not sick enough to not vote, and on and on? No, the room, save the poll workers, was nearly empty, and they were all staring at me. I presented my license for identification at a table manned by two women, one red and one blue. I was then directed to a second table where before two other women (again in contrasting red and blue), I was to declare which primary I wished to vote in. After I spoke the name of the party for which I wished to vote, one woman out of two became visibly friendlier, while the other became dismissive. I moved off to a voting booth quickly.

In the little voting station I looked at my ballot. It clearly said to mark my choice with a #2 pencil, but no such pencil was provided for me. There was a pen on a chain with a little sign up to my left in the booth that said more or less “Use the pen.” I wondered how many elderly or simple people became confused by the contradictory instructions and in some way botched or negated the assigned task. Was this deliberate, I wondered? Is this a veiled way to weed out voters? I just don’t know. I used the pen. I darkened my choice. I moved out of the booth and to the scanning machine at the end of the room.

Not knowing which way to insert my ballot, I inquired as much from a poll worker. I was told amiably that it didn’t matter. Such an important process, but the exact details of the process didn’t matter. Hmmm.… A young college student assisting at the polls – one of the only two people in the room to not have on polarizing colors – slapped a “My Vote Counts” sticker in my hand idealistically and I was done.

I walked out of the building and started to walk past the elderly booth worker. He earnestly called to me, knowing that I had already voted in the primary. “Come learn about my man, Ben Carson. Let me give you a book on him.” I hurried past him thanking him abruptly, but he had my attention. Dressed in a retired Navy jacket, this elderly white man was the only constituent invested enough to show up at the voting station to advocate for his candidate – an accomplished if awkward black Republican that arguably had zero percent chance of winning today. It challenged logic, it challenged the divisive race dialogue that is ubiquitous in America right now, it made Trump and Hillary and Cruz and Sanders supporters look lazy or without hope. Or perhaps it made the latter look smarter, since with the advent of super-delegates it seemed to me like the candidates for each party were a foregone conclusion, and my vote was little more than a hopeful exercise in a sea of futility. I admired the man, and he frustrated and puzzled me, but he did make me think.

As I drove to work I truly pondered whether or not my vote counted for anything. Knowing that 2/3 of Americans don’t exercise their Constitutional right, but I had, gave me little comfort, counter-armed with the belief that the political machines are bigger, more powerful, and more corrupt than ever. I wondered why each of the poll workers had dressed as they had? Was it to empower, or to intimidate, or to keep an eye on each other, or all of the above? Was this what we had become – a nation of red and blue, where purple only existed in the blustering faces of our politicians? I smiled as I thought back to the one political race I had voted in where I truly believed in the candidate, where what he had said had made sense, had mattered, and had been said with civility and charm. I had met that candidate back then, even been seen on the BBC talking to him, and even now it’s one of the proudest votes I’ve ever cast.

It was the U.S. Senate race of 2012, and my candidate had lost, but came in a solid third place, and had since passed away, but none of that mattered. He was still the most honest politician I had ever voted for.

And he was a cat.

Love Live Hank! May his dream of a better tomorrow live on.
Namaste,
Jason 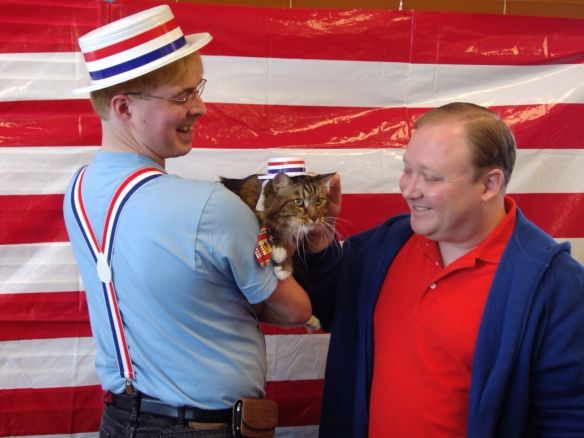 Hank and I meeting at a campaign rally in 2012 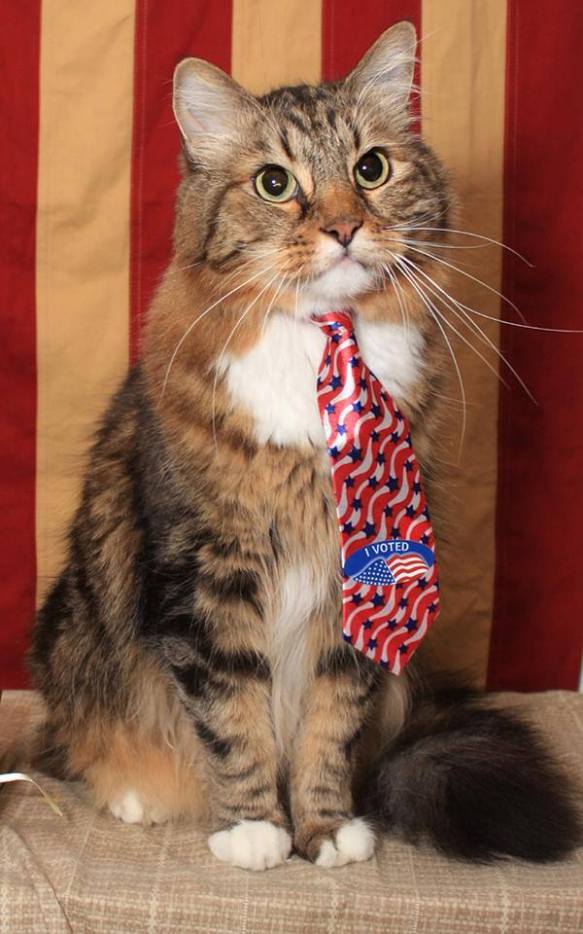 Hank the Cat. Photo credit: Wild About Hank on Facebook