This past Saturday, March 11, Nancy and I went to the Philadelphia Flower Show for the 14th consecutive time. Our first date was at the 2004 Flower Show on March 8. I proposed at the 2011 Flower Show (it was Paris year after all). It has become a long-running beloved tradition for us. It’s hard to believe next year we will celebrate our 15th time going together. How time flies.

The night before the show, we arrived in Upper Darby, dropped off the little man, and then continued on to Bethlehem, PA’s beautiful arts complex down by the renovated “steel stack” district to see our favorite Celtic band, Enter the Haggis, perform. From 8 to 10:30 PM ETH played in the third floor lounge while we drank Woodchuck and sampled bleu cheese chips and bread pudding. Their two sets – consisting entirely of up tempo familiar songs – were rousing and fun. John Adams listens relentlessly to a lot of their new music, so we got a lot of laughs out of hearing live many songs that we are bombarded with daily by him. We had a great experience, drove home to Nancy’s parents’ house, and went to bed sometime after midnight.

The next day we got up late, had breakfast, and went downtown to the Flower Show by early afternoon. This year’s theme, Holland, truly was a breath of spring as compared to the last few years’ themes, which were good unto themselves, but executed with sometimes mixed results. This year it seemed every exhibitor took the theme to heart, but also had the same impressions in mind. That might sound like a dig, but it’s not. The resulting displays were largely all gorgeous. They were almost all decorated with bulbs, bridges over water features, and lots and lots of bicycles. There were big bridges and small foot paths. There were functioning bicycles, rusted bicycles, bicycles as fountains, artsy bicycle sculptures, and whatever else you can think of. And the bulbs were every color of the rainbow and everywhere. One stunning blue tulip was actually a white one that had been fed water with blue dye. The dye travels through the petals and colors the flower. Gorgeous. In addition to the floral displays, there were themed food vendors, both a Legoland and a butterfly pavilion (neither of which we did this year), and lots of shopping. We brought back a few herbs for John Adams to plant and Nancy bought a dandelion seed necklace that she’s been eyeing for several years. 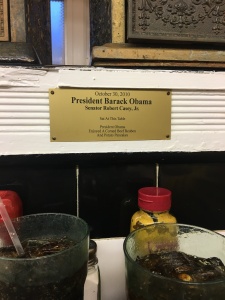 The plaque at our table.

We capped our downtown experience off with a visit to the incomparable 4th and Bainbridge Deli for soup and a pastrami cheese steak. Their meats (and portions) are out of this world, and we could only eat so much, as we were heading back to Nancy’s parents’ house for cheeseburgers with the family that evening. After we were seated at the deli, we noticed a plaque indicating that President Obama and Senator Bob Casey Jr. had dined at our same table back in 2010 when they visited; just one more fun little memory to commemorate our experience.

The next day we all gathered at Wron and Sara’s for a mega-ham dinner with lots of delicious sides before heading back to King George, VA. We were full and tired, happy and wired. It had been a beautiful event-filled weekend to celebrate our “dating anniversary.”  If you are so inclined, I highly recommend the Philly Flower Show. Every year is different and it’s always worth seeing. And eating at the 4th Street Deli is like nothing else. Both events are pricey, but ultimately worth it. Enter the Haggis is a rollicking good time and not expensive. I also recommend eating at Nancy’s parents’ house, but call ahead in case my in-laws have plans. 🙂

I wish you all a little bit of winter joy as well.