I have not blogged in more than two months. There was no concerted plan behind this choice. Life gets busy, inspiration doesn’t strike, the reader stats leave me disappointed, my hands hurt, I choose not to share my thoughts, any and all the above. So much has happened since August when I wrote my last post. The world has gone up and down, awash in political and socio-cultural turmoil. Where will it lead? Who knows.  My life has felt like it’s been on a similar roller coaster, emotional and otherwise. Every perceived good has a down side; every happy moment is laced with the dewy-eyed veneer of sadness. Here are three examples from recent memory:

One:Our house had two trees crash into it in April. Many readers, friends, and family know this. The trees tore the front parts of the roof and siding off, ruined the storm door, iron railings, and shrubbery. For the six months that followed I went into our property management office (we rent) and politely requested that something be done, and for the better part of six months I was told that there was nothing that could be done until the owner chose to do something. He had the trees removed two weeks after the storm, but everything else waited for five months: waited for him to settle with his insurance, collect a fat check, and then repair our rental as cheaply as possible. When the repairs were finally completed two weeks ago, his handymen left trash and building materials all over our lawn. Again I requested, politely, that this long nightmare be finished. Come get your trash and let’s be done with it. Last week they did, and the repairs were completed and the ordeal was over. Happy, right? And then this week he had the rental office send a strongly worded letter to us complete with “spy” photos, wherein someone came on the property to document all the things he didn’t like about the way we were maintaining his property. Maintenance of our grounds had fallen by the wayside while we waited for repairs to be completed, it’s true, and he seized on every detail. Including some furniture we had moved out of the house after being gifted new pieces by a relative. To be fair, the maintenance requests are not unreasonable, and they are our responsibility. But the timing could only be interpreted one way: we had forced his hand  – albeit politely – to complete necessary repairs before winter, and so, purely out of spite, he was going to throw his weight around to show us whose property it is. Oh, and he raised our rent, before beginning repairs! We are happy the long process of repairs is complete. However, despite our best efforts to be gracious and patient, we still evoked the wrath of our elderly cheap ass miser of an owner, and we now need to contend with that. 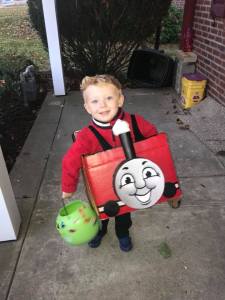 Two: Once again, I was unable to be with my son on Halloween. This is three years running that he has gone trick-or-treating without me. It’s not that I didn’t have a choice in the matter; Nancy and I were home on Halloween. But our home, along route 301, has no neighborhood to take him into. So every year, we farm him up to his grandparents outside Philly to maximize his candy quotient. Photos and video come back to us of our little boy being Halloween Boss, running up and down the street, knocking on doors, exclaiming, “Trick or treat, smell my feet, give me something good to eat!” in one deliciously semi-incoherent sentence chain of candied ecstasy. He has the time of his life while we sit at a distance watching him make a ‘best’ memory. I begrudge neither him nor his grandparents anything, and we wouldn’t send him unless we knew he would have a better time up north, which he does. It makes me happy to see he and his grandparents create such a joyous memory. And sad that Nancy and I are not a part of the experience.. 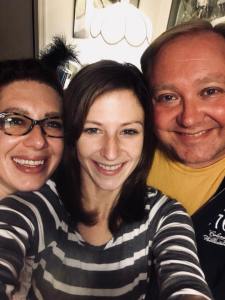 Three: Mary Anne, Nancy’s sister, got in her little red car on November 1 and drove to Florida to begin a new life there. For six years she lived in and around Fredericksburg, the only family we had in the area. But a few weeks, ago the last of the ties holding her to this area were severed, and it became apparent that it was time for her to move her life forward in new ways in a new location. We helped her pack her goods. We housed her off and on for two weeks. Fed her. Oh, we fed her. And then the last night came, and she and Nancy cried. And then that morning, with Nancy off to work, it was my goodbye, and a hug, and a stoic I Love You, and I silent stance at the door, and then she drove off to new horizons as our house fell silent. The time was right, and we couldn’t be prouder of her that she’s finally going off on her own in pursuit of her dreams. Only time will tell if Florida is the right fit, but the intent is on target, and we back her 100%. Still, watching her drive off, knowing how much my son loves her, knowing she’ll be alone, knowing we won’t be in contact near as much, is bittersweet, you know. Happy/Sad.

Yeah, that’s the way the last few months have gone. Here’s hoping in the weeks ahead there’s more of the former and less of the latter.

And I wish that for you too as well.

1 thought on “Living in the Happy/Sad”